Many companies are looking to engage their audience across multiple channels. Using twitter to entice people to sign up for their email newsletter, tv ads to drive traffic to their website, one sales- or promotion channel to promote the other.  Many are adding ‘social buttons’ to their email messages now, calling it an integration ( i don’t agree). But some are sending whole messages focused on introducing other channels.

Bed Bath and beyond did just that, promoting one channel via the other. In this can using email to gathering Facebook fans. The subjectline:  “Join thousands of our Facebook fans. LIKE us now.” 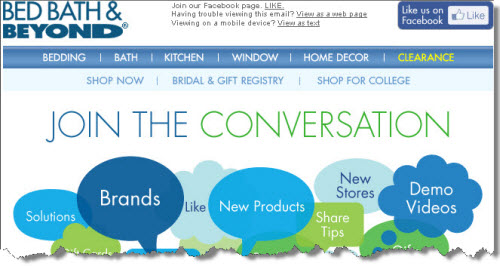 Even if you are not on Facebook, or don’t feel for LIKE-ing them BB&B gives you a few ways out. If the main Call to action doesn’t suit you, the navigational bar and the promotions at the bottom of the mail let you jump towards the site. Important is that it doesn’t take all the attention away from the main Facebook promotion.

Can you count them? One, two, three, four, five links to Facebook. Including a text based link at the top of the email, for those with images turned off. That is a lot of thumbs up.

And not just one, the whole center piece gives you a lot of reasons to like them on Facebook. There is definitely a lot going on on their Facebook, which is also a good thing. Why promote a channel when nothing is going on there?

The main message has a simple show and hide animation (see it in action). The animation adds some extra attention value, while giving the recipient time to see the different reasons. We say that is smart, because if you see it all at once, it might be a bit too much.

Bed bath and Beyond created a very LIKE-able email, promoting their Facebook activities to their emaillist. A next step might be to analyze and see who is interacting via both channels, picking influencers and segmenting emails targeted to ‘digital A-listers’. Or maybe just take it easy and promote their email newsletter via Facebook.

About the Author: Jordie van Rijn

Hi there,
Want to get more out of email marketing? Subscribe, because the really good email marketing tips are in the newsletter.
Subscribe
You can unsubscribe anytime, but you won't even want to.